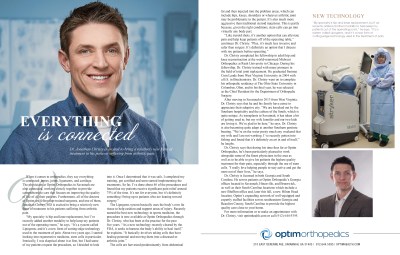 When it comes to orthopedics, they say everything is connected: bones, joints, ligaments, and cartilage.

The physicians at Optim Orthopedics in Savannah are also connected, working closely together to provide comprehensive care that focuses on improving the quality of life of all their patients. Furthermore, all of the doctors at Optim are fellowship-trained surgeons, and one of them, Jonathan Christy, MD is excited to bring a relatively new form of treatment to his patients suffering from arthritic pain.

“My specialty is hip and knee replacement, but I’ve recently added another modality to help keep my patients out of the operating room,” he says. “It’s a system called Lipogems, and it’s a new form of cutting-edge technology used in the treatment of pain. About two years ago, I started looking into regenerative medicine, stem cells in particular. Ironically, I was skeptical about it at first, but I had some of my patients request the procedure, so I decided to look into it. Once I determined that it was safe, I completed my training, got certified and soon started implementing the treatments. So far, I’ve done about 40 of the procedures and found that my patients receive significant pain relief around 75% of the time. It’s not for everyone, but it’s definitely something I bring up to patients who are leaning toward surgery.”

The Lipogems system basically uses the body’s own fat tissue to help cushion and support areas of injury. Recently named the best new technology in sports medicine, the procedure is now available at Optim Orthopedics through Dr. Christy, who has been at the practice for the past five years. “As a new technology recently cleared by the FDA, it seeks to harness the body’s ability to heal itself,” he explains. “It basically involves taking cells that have healing potential and moving them into a diseased or arthritic joint.”

The cells are harvested predominantly from abdominal fat and then injected into the problem areas, which can include hips, knees, shoulders or whatever arthritic joint may be problematic to the patient. It’s also much more aggressive than traditional steroid injections. This is partly because, given the right conditions, stem cells can go into virtually any body part. “Like steroid shots, it’s another option that can alleviate pain and help keep patients off of the operating table,” continues Dr. Christy. “Plus, it’s much less invasive and safer than surgery. It’s definitely an option that I discuss with my patients before operating.”

Dr. Christy completed his fellowship in adult hip and knee reconstruction at the world-renowned Midwest Orthopedics at Rush University in Chicago. During his fellowship, Dr. Christy trained with many pioneers in the field of total joint replacement. He graduated Summa Cum Laude from West Virginia University in 2004 with a B.S. in Biochemistry. Dr. Christy went on to complete his orthopedic residency at The Ohio State University in Columbus, Ohio, and in his final year, he was selected as the Chief Resident for the Department of Orthopedic Surgery. After moving to Savannah in 2013 from West Virginia, Dr. Christy says that he and his family have come to appreciate their adoptive city. “We are knocked out by the Southern hospitality and the culture of the South, which is quite unique. As transplants to Savannah, it has taken a bit of getting used to, but my wife Jennifer and our two kids are loving it. We’re glad to be here,” he says.

Dr. Christy is also becoming quite adept at another Southern pastime: boating. “We’re on the water pretty much any weekend that my wife and I are not working. I’ve recently gotten into fishing and found that it’s definitely an art in and of itself,” he laughs. Dr. Christy says that during his time thus far at Optim Orthopedics, he’s been particularly pleased to work alongside some of the finest physicians in the area as well as to be able to give his patients the highest quality treatment for their pain, especially through the use of stem cells. “I really love helping people to stay active and get the most out of their lives,” he says.

Dr. Christy is licensed in both Georgia and South Carolina. He serves patients at Optim Orthopedic’s Georgia offices located in Savannah, Hinesville, and Brunswick, as well as their South Carolina locations which include a new Bluffton office and, later this fall, a new Hilton Head location. Optim’s expanding network of well-equipped and expertly staffed facilities serves southeastern Georgia and Beaufort County, South Carolina to provide the highest quality care close to your home. For more information or to make an appointment with Dr. Christy, visit optimhealth.com or call (912) 644-5395.