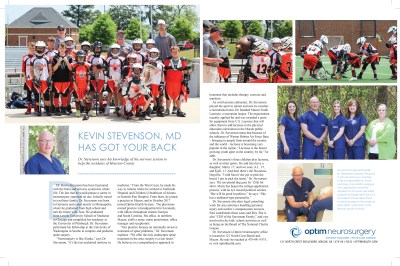 Dr. Kevin Stevenson has been fascinated with the brain and nervous system his whole life. The fact that he would pursue a career in neurosurgery surprised no one. Initially raised in a military family, Dr. Stevenson was born in Germany and raised mostly in Minneapolis, where he graduated from high school and met his future wife, Sara. He graduated from Loyola University School of Medicine in Chicago and completed his residency at the University of Pittsburgh. Dr. Stevenson performed his fellowship at the University of Washington in Seattle in complex and pediatric spine surgery.

“Neurosurgery is like Alaska,” says Dr. Stevenson, “it’s the last uncharted territory in medicine.” From the West Coast, he made his way to Atlanta where he worked at Northside Hospital and Children’s Healthcare of Atlanta at Scottish Rite Hospital. From there, he joined a practice in Macon, and in October 2017 joined Optim Health System. The physician owned practice is headquartered in Savannah, with offices throughout eastern Georgia and South Carolina. His office, in northern Macon, staffs a nurse, nurse practitioner, office manager and receptionist.

“Our practice focuses on minimally invasive treatment of spine problems,” Dr. Stevenson explains. “We offer the only endoscopic spine treatment in the area; surgery is a last resort.” He believes in a comprehensive approach to treatment that includes therapy, exercise and nutrition.

An avid lacrosse enthusiast, Dr. Stevenson played the sport in school and now he coaches a recreational team. He founded Macon Youth Lacrosse, a recreation league. The organization recently applied for and was awarded a grant for equipment from U.S. Lacrosse that will allow them to add lacrosse to the physical education curriculum in the Macon public schools. Dr. Stevenson notes that because of the influence of Warner Robins Air Force Base – bringing in people from around the country and the world – lacrosse is becoming very popular in the region. “Lacrosse is the fastest growing youth sport in the country, by far,” he adds. 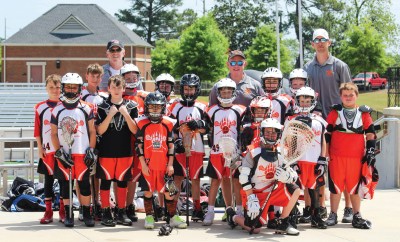 Dr. Stevenson’s three children play lacrosse, as well as other sports. He and Sara have a daughter, Marta, 17; and two sons, A.J., 15, and Kjell, 13. And then there’s the Havanese, Dogzilla. “I told Sara if she got to pick the breed, I got to pick the name,” Dr. Stevenson says. The ten-pound dog goes by ’Zilla for short. Marta has begun the college-application process, with an eye toward political science. “She will be good in politics,” he says. “She has a mediator-type personality.” Dr. Stevenson also does legal consulting work for area attorneys handling personal injury and worker’s compensation lawsuits. Sara coordinates those cases and files. She is also “CEO of the Stevenson Family,” and very involved in the kids’ school activities as well as being on the Board of The National Charity League.